Here is the most recent edition (March 22, 2017) of A Deeper Dive, my occasional newsletter. I found that New York counties collect a smaller share of the real property tax pie than they did a generation ago.

The topic of the second edition (February 23, 2017) was job growth in New York State.

My first edition (December 20, 2016) can be found here. It dealt with New York State’s Financial Condition.

This example, which I created before launching A Deeper Dive, is a graphic that addresses the ‘honest and trustworthy’ issue during the 2016 Presidential campaign. 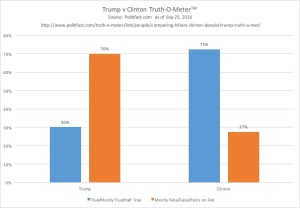 Posted in Evidence | Leave a response